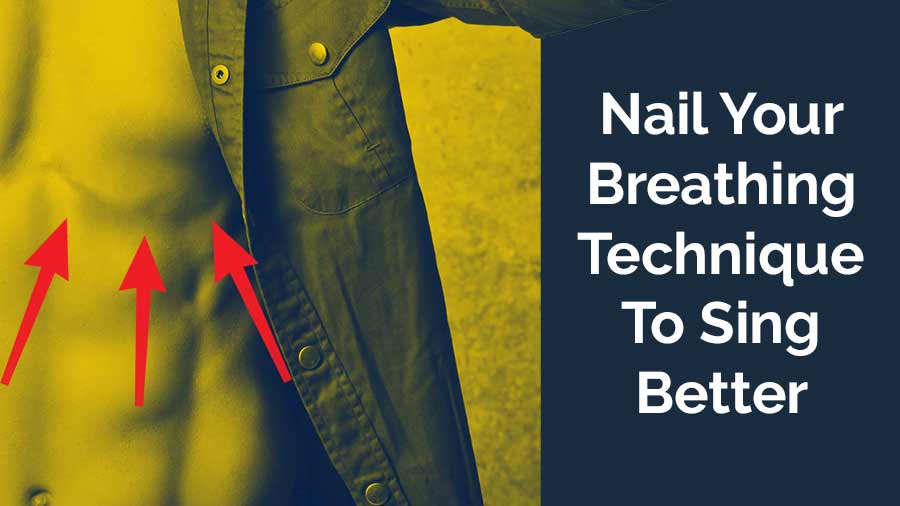 How To Breathe While Singing

Breathing for life is one of the most natural things we do, everyone does it without even thinking about it. Breathing while singing is a whole new ball game though and I dare to say that beautiful, effortless singing always lays its foundations on a flawless breathing technique.
Keep reading if you’re looking to learn or enhance your breathing technique and become a better singer. You’ll find out what’s the most efficient way to breathe while singing, and also learn how to recognise incorrect methods of breathing. This will allow you to self-correct potential bad habits you might have fallen into.

The main difference between breathing for life and breathing for singing is the amount of conscious control we apply on the latter. We need to develop this control until the necessary actions involved with our breathing become conditioned reflexes.
If we look at the mechanics of our breathing, we see that the primary muscle responsible for bringing air into the body is the diaphragm, a dome-shaped muscle placed between our lungs and our abdominal cavity. Without going into too much detail, the diaphragm moves down when we breathe in, creating a vacuum in our lungs that allows them to fill with air. And when we breathe out the diaphragm moves back up, the lungs go back to their original shape and, with the assistance of the rib and abdominal muscles, the air is exhaled.

How To Breathe While Singing - Stage 1: Inhalation

Inhalation for singing is quicker than in natural breathing. This enables us to inhale more air and send it deeper into our lungs. Air should enter our body easily and noiselessly. This can be encouraged by lifting the soft palate and relaxing the muscles of our throat, exactly as we do when we yawn.

Now, for this whole process to happen smoothly we need to make sure that 3 postural conditions exist before we inhale: our chest should be comfortably high, our lower abdomen comfortably in and our upper abdomen free to move. Whenever one of these 3 conditions is missing, problems arise. However, if our posture is correct, whenever we breathe in, we should feel the air go down into the body and the middle of our body expand out, almost like it was the breath causing the expansion rather than the displacement of the viscera. We should see our back and sides expand but the greatest expansion should happen in the front of the body. You can check you’re actually doing the right thing by placing your hands on your sides with your index fingers just below your last ribs.

How To Breathe While Singing - Stage 2: Suspension

The second stage of breathing for singing is called Suspension. This has no parallel in natural breathing where the breathing-in and breathing-out phases merge seamlessly into each other. The suspension basically allows to set up the equilibrium between the breathing-in and the breathing-out and to prepare the breathing support mechanism for the phonation that follows. To have an idea about how suspension feels like, breathe in and, when you feel that your lungs are full, contract the diaphragm like if you were still breathing in, even after you’ve stopped doing so. This basically facilitates a smooth control over the attack of the sound that follows, without the vocal mechanism having to make too many adjustments.

How To Breathe While Singing - Stage 3: Exhalation

The third stage is the Controlled Exhalation, which in coordination with the vocal cords produces phonation. The exhalation should happen slowly as the diaphragm releases its tension and goes back to its original position. One of the best ways to gain control over the exhalation is to try and maintain the expansion around the middle of the body as you breathe out.

How To Breathe While Singing - Stage 4: Recovery

The last phase is called Recovery. During the recovery phase, all the muscles associated with breathing relax. This is extremely important because muscles are more efficient when allowed to rest and recover.

The 4 Incorrect Types Of Breathing

Breathing correctly is extremely important if you’re serious about singing. So it’s vital that you are able to identify and fix any problems if your technique is not up to scratch. There are 4 main incorrect types of breathing: Upper chest breathing, Rib breathing, Back breathing and Belly breathing. The Upper chest breathing is very easy to spot as it features a very noticeable rising and falling movement of the chest. An easy way to sort the problem out is to practise in front of a mirror. You should make sure that when you breathe in and out your chest and shoulders don’t move up and down. And the upper abdomen, along with sides and back, moves in and out.

In rib breathing the rib cage is the only focus of the act of expansion as in back breathing, the back becomes the only focus. All 3 methods I’ve just mentioned aren’t desirable because they don’t allow the diaphragm to move down as much as it should, are associated with poor posture and create muscular tension that can be transferred to the vocal mechanism.

The fourth incorrect type, Belly breathing, instead limits the ability of the diaphragm to go back to its original position. Belly breathers “push against their belt” while they sing, which locks the diaphragm in its lowest position and requires our body to find alternative ways to move the air out, like for example squeezing the chest down on the lungs. Maintaining a correct posture is most of the times the best remedy for Belly breathing.

I hope this gives a pretty good overview on the basics of a correct breathing technique and will hopefully help you become a better singer.

How To Identify Vocal Registers

What Do You Play?